Posted on January 8, 2013 by tylersherrod

Well it’s a new year and I have new adventures ahead of me here in Japan. It’s hard to believe that I’m about to begin the third year of my apprenticeship. It only seems like yesterday that I arrived here in Obuse and was given my first lesson on the proper way to sweep the floors… I’ve come a long way!

I know I was lacking on blog post over the last year and I got a lot of heat from family and friends of the blog, for that I am sorry. I promise to be more regular with post in the year to come!

For New Years, Oyakata set up a display in the tea room which included this years Prime Minister’s award in the Sakufu competition. 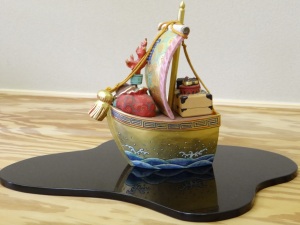 These bulbs are on the verge of bloom and I’m not exactly sure what they are…many suprises awaits us this year!

Being that it is a new year, I’d like to show you the last tree I worked on before I left for my Christmas vacation. It’s a white pine that has been around the nursery for a while. I was actually given this tree to work on about a year ago, but some how it slipped by and I never got to it. Time passed and it was forgotten or some more important work came along….and a year passed. Then just before Oyakata was heading out to Tokyo for the Sakufu competition, he remembered this tree and told me to work it while he was gone.  This time I got right to it.

It was a difficult tree in my mind. It had previously been repotted so that it somewhat cascading, but had a branch shooting out from the base under the main trunk that gave a real cascading design difficulties. So I tipped it up more virtaclly and began to see a windswept like tree in my mind. I began to cut off branches that i knew I didn’t need and saw the tree more clearly. With a pile of branches left on the floor, I put wire on the ones that remained.

Originally I let this tree slip by me because I had troubles seeing any potential in it. But when I got down to it, it really wasn’t that hard. Even though it many never be a masterpiece I think it turned out OK and hopefully the owner will be happy to get it back and looking good.

Next I will show you the first tree that I got to work on in this new year, a much better white pine! 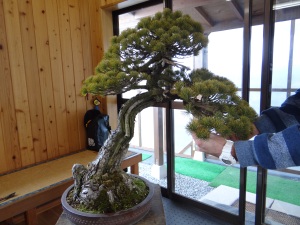 After I had cut off a few large branches I realized i hadn’t taken a before picture, so Matt was kind enough to hold them back in place! Thanks Matt!

This one was much more straight forward, get the tree back into shape. So I began by cutting off a few larger branches that had grown too long. One large branch was to the back and as you can see from the picture above, one was a branch that grew out from the main right branch. By doing this I could compact the profile of the right side of the tree. I made those branches in to deadwood then began to place wire on the tree beginning with larger wire and moving on to smaller wire.

Oyakata was pleased with the results and I was as well. He told me that he may try to put this in a nice antique pot and enter it into the judging for Kichou Bonsai (important bonsai masterpiece) this year. I will let you know what happens.

Well that’s one post for the year and I promise it won’t be the last! Soon to some will be this years Kokufu trees that we just repotted along with the trees I prepared for it, as well as some posts of work that I did over the last year to catch you up on things.

As always, thanks for visiting and please spread the word that Tyler Sherrod Bonsai is back in business! 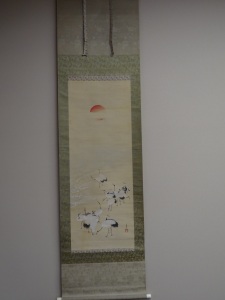 This entry was posted in Around the Nursery, Before and After, Display, Uncategorized. Bookmark the permalink.